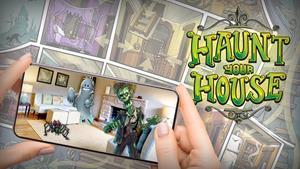 CHATSWORTH, Calif., Aug. 23, 2022 (GLOBE NEWSWIRE) — Micro Games of America™, a division of MGA Entertainment (MGA), announced today the launch of its Kickstarter campaign to bring its new AR-enhanced tabletop game Haunt Your House™, the first title in its new, proprietary App-Vanced™ Game series, to market. Combining the best of tabletop and AR gaming in an immersive and social experience for families and gaming enthusiasts alike, the beta version of the game was previewed at Gen Con in August, receiving great interest, response, and feedback. Backers of Haunt Your House through the Kickstarter Campaign will support further development and enhancement of the game before an expected broad launch in late summer 2023, and will be eligible for special, exclusive offers, like an advanced set of the deluxe edition or advanced multiple sets of the standard edition.

“MGA Entertainment got its start in the gaming space and this launch represents a big leap back to the future for us,” said Isaac Larian, MGA Entertainment’s Founder and Chief Executive Officer. “The hard work put in by the Micro Games of America team in bringing Haunt Your House to market and the development and introduction of our App-Vanced Game series demonstrates our commitment to our games division and to growing this part of the business to the benefit and delight of game nights around the world.”

In Haunt Your House, players act as paranormal investigators searching through a haunted house with the help of their AI assistant, Boogle™. Using a smartphone or tablet, players hunt for AR monsters that emerge from the physical gameboard. When the gameboard gets overrun, players must catch monsters in their own house and bring them back to the haunted house.

The introduction of Micro Games of America’s new App-Vanced™ Games series shows the brand’s commitment to taking gaming to the next level. App-Vanced easily and seamlessly integrates tabletop games, which bring people together in a social experience that builds memories, with AR and mobile games, which bring rich and immersive storytelling and interactive play, into an interactive, immersive, and social experience.  This line of games brings the depth of digital to tabletop games and the in-person, cheer-inducing, bonding moments of tabletop to digital games.

“We received awesome feedback from Gen Con enthusiasts and multiple game testing players for the beta version and are finetuning the game, but we need Kickstarter backers to get behind this launch and help bring our original monsters to life for the final version next summer,” said Mark Morse, Vice President, Marketing, Micro Games of America.